Crayons and paper were scattered on a small table where a two year old was playing.  A few adults joined the child and began doodling.  Nothing serious (how could it be, they were simply using crayons).  Yet Susie, who had a knack for creativity and drawing, began sketching some jars that sat on a nearby shelf.  Her doodling became art.

The child’s crayons became fun entertainment for both of them, but for Susie, they also became a creative medium that added to her enjoyment.  She had, with a lot of practice, honed her skill over time – crucial to becoming proficient at any talent. 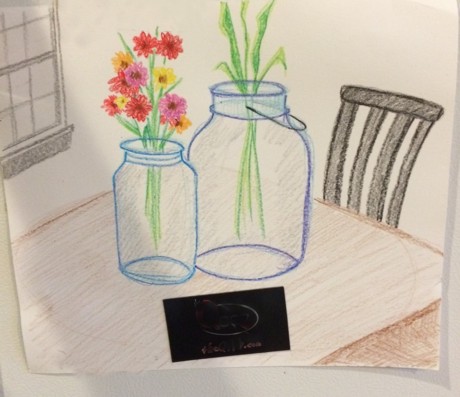 The jars drawn with crayons is hanging on a fridge, but this gives you the idea.

If you never spend time drawing, you’re not going to produce eye catching art on your first few tries.  That’s okay though.  If it’s something you seriously want to try, be willing to start small and simple. Even using the “doodle and discard” approach works wonders when it comes to drawing. Doing is how it becomes easy.   Susie was able to exhibit her skill, even while using crayons, because she’s always drawing something.

Susie has also learned to observe with purpose, which is an important key to successful creativity. She had come with friends to a home she hadn’t been to before; but it didn’t take her long to scope out her surroundings and notice the jars.  Sometimes a creative idea is only as far away as your current location.

It wasn’t long before others came to see what was happening at the kiddy table.  They were immediately impressed when they saw Susie’s drawing.  “Wow, that’s so good.”  “I could never do that.”

Well, not without some practice anyway.

Yet Susie was quick to point out to these young ladies that though they might not be great at sketching, they were very talented when it came to making cool crafts.  It’s simply a matter of personal preference and creative desire. No matter what medium is used or what style is attempted, it’s easier to accomplish when doing something you’re interested in.  This doesn’t mean it will be easy at the beginning, but with some time and effort, your creative outlet will become enjoyable.  Not only for you, but for those who will take pleasure in your results.